Sukuk Bond: What does it mean to us?

Sukuk, commonly meant as an Islamic bond based on Sharia-compliance is a financial instrument that represents a part of ownership in a portfolio of assets (usually tangible assets) which is managed as per Islamic Sharia.

In Islamic finance, conventional bonds are forbidden as it includes interest (Riba or Usury), which is fixed and possess as an obligation to pay to its investors.

Sukuk does not represent a debt obligation like conventional bonds. In the issuance process of Sukuk, the issuer sells bond certificates to investors. Then, the issuer uses the proceeds from the certificates to purchase the underlying assets, where investors receive partial ownership of the asset. Finally, the investors are entitled to receive part of the profits generated by the asset. Therefore, it’s somewhat similar to a lease contract without any debt obligation.

The unique nature of Sukuk requires a specific issuing process. The following steps are common in the issuance process:

Similarities between Sukuk and Conventional bonds

Despite the similarities, there are few important differences between Islamic and conventional bonds, as summarized in the table below:

The Global Sukuk market closed the year with modest growth due to higher commodity prices particularly Oil and continuation of increases in Sovereign Sukuk issuances, stable Corporate Sukuk issuances in certain jurisdictions, and a healthy Sukuk issuance pipeline for 2019. Sukuk continued to gain attention from new issuers as well as increasing investor base which is an encouraging development. During the year Sukuk was issued as a viable alternative source of financing for infrastructure

There were several events during 2018 which can be noted as landmark events such as the UK based Al Rayan Bank’s public issuance of Sterling (GBP) 250 million securitized Sukuk, Indonesia-based Blossom Finance smart Sukuk, and African Finance Corporation USD 150 million Sukuk. The new sovereign entrant issuers are Morocco and Mali and both the issuances were in local currencies. Moreover, the continued interest from the well-established sovereign, quasi-sovereign, and financial institutions issuers such as Governments of Bahrain, Indonesia, Turkey, Pakistan, Oman, Saudi Arabia, United Arab Emirates, and Islamic Development Bank which has kept the Sukuk market active. 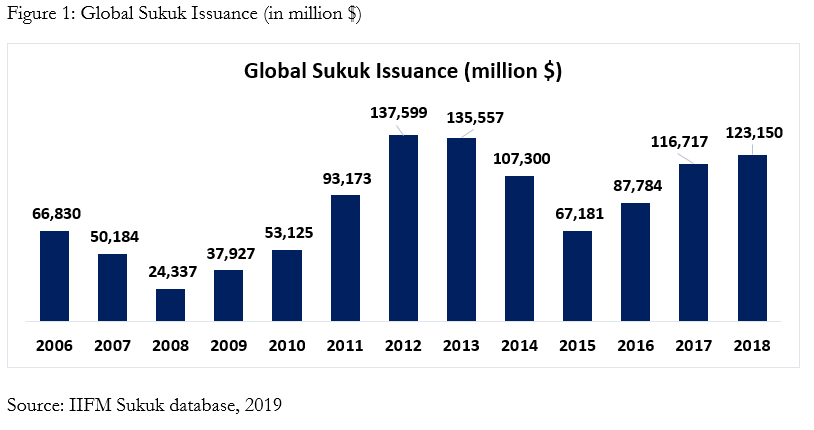 The issuance of Global Sukuk bonds has been steadily increased between 2008 and 2012 and then between 2015 and 2018 (Figure 1). The issuance in 2018 amounts to $123,150 million, which is almost double in comparison to the amount of 2015 and 2006. This refers to the popularity of the instrument is increasing with the financial inclusion of Islamic Finance worldwide. The historical data on the graph shows that there was a declining trend in the issuance of Sukuk between 2006 and 2008 mainly induced by the global economic crisis of 2007-08. But with the revival of the global economic scenario, the number has been increased from $37,927 million to $137,599 million between 2009 and 12. In 2012 there was $137,599 million in issue; the highest amount in the issue since 2006. 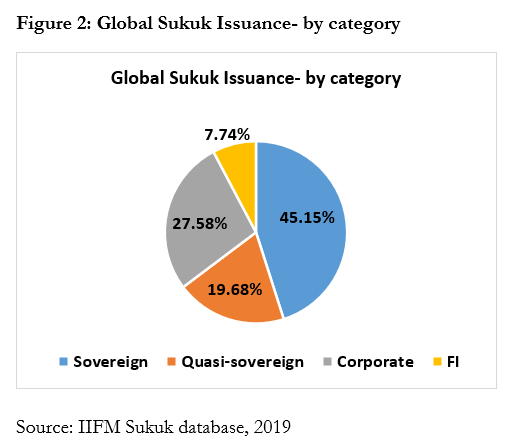 The majority of Sukuk bond has subscribed under the Sovereign category accounting for 45% of all. This is mainly powered by Fareast Asia and the Middle East.

Only 8% of the instruments have been issued under Financial Institutions (FI) Category as Sukuk is yet to have a position compared to highly popular conventional bonds. 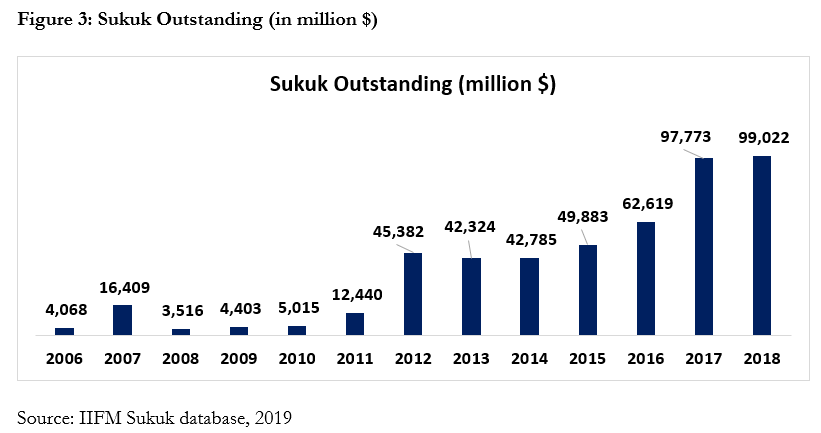 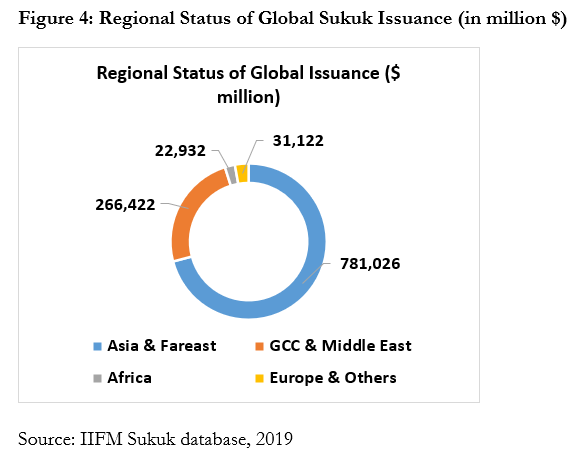 A total of $781,026 million of Sukuk were issued in Asia and the Fareast region, the highest across regions in the world.

GCC & Middle East took second place with $266,422 million of issuances. Overall, Asia accounts for 95% of all issuances, mainly driven by the largest Muslim population living in the region.

In Bangladesh, there is 4 issue of Sukuk which amounts $37 million.

What do critics tell about the Sukuk Bond?

Sukuk have been criticized as evading the restrictions on Riba and imitating conventional bonds. In February 2008, the Accounting and Auditing Organization for Islamic Financial Institutions (AAOIFI)’s board of scholars, led by Sheik Muhammad Taqi Usmani, stated that as many as 85 percent of Sukuk sold to date may not comply with all the precepts of Shariah.

In a paper entitled “Sukuk and their Contemporary Applications” released in November 2007, Usmani identified the following three key structuring elements that differentiate Sukuk from conventional bonds:

Usmani stated that by complex mechanisms, Sukuk had taken the same characteristics as conventional interest-bearing bonds, as they do not return to investors more than a fixed percentage of the principal, based on interest rates while guaranteeing the return of investors’ principal at maturity. Usmani estimates that 85% of all Sukuk in issuance was not Shariah-compliant was based on the existence of guaranteed returns and/or repurchase obligations from the issuer which is a violation of Shariah.