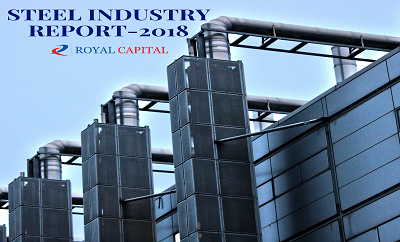 Steel is a one of the world’s most innovative and essential material. It is infinitely recyclable and exceptionally strong, steel offers an array of sustainable benefits and used in every aspect of our lives. The steel industry’s significance for our prosperity and welfare cannot be emphasized enough. The products of this industry also play a crucial role in the development of the sustainable society. Competitive Steel companies generate employment, export earnings, tax revenues and innovations.

Globally China leads the market of world’s steel and is the highest producer, consumer & as well as the exporter (around 50% of the world’s total production) according to World Steel Association.

Apparent Steel Use in Asia (2017) in million tonnes

In Asia, China is the largest user of steel consuming about 755 million tonnes. India, Japan & South Korea holds the next positions respectively.

Apparent Steel Use Per Capita (kilogram)

According to the graph, China is the top steel consumer in the word, as well as it holds the top position in production and export. Then the 2nd position holds the south Korea & whereas if holds the 6th positon in global crude steel ranking. From the below graph we also see the Germany is in the 4th position for steel consumption.

Bangladesh is one of the Asia’s leading emerging steel markets & has a growing need for raw materials and steelmaking technologies. The GDP growth in Bangladesh is now 7.68%, which is significantly higher that of many other emerging markets. The movement towards a progressive national economy strongly depends on the how construction materials specially steels related industries have evolved and such products are readily available. Presently the market size of this industry is 300 billion dollars in our country. The industry grew from producing a merge 47,000 MT in 1971 to 4.0 million Mt in 2015.The production of this sector expected to double about 8.0 million Mt on 2022 by the industrialists. In the last year, the total production is 5.5 million MT, this year up to October production is 7 million tones & the capacity is about 8 million MT which indicates gradually expansion of steel industry in our country.

The steel industry in Bangladesh is oligopoly in nature. Even though there are currently over 400 active firms in the industry, three big steelmakers: BSRM, Abul Khair Steel and KSRM – supply more than 50% of the country’s annual need of steel. Abul Khair Steel’s re-rolling mills is capable of producing 12.75 lac Mt high quality graded hot rolled steel (TMT) bars per annum. BSRM has the strong presence in the market with around 1.2 million Mt capacities of MS rod and bar annually. The market leader Abul Khair Steel (AKS) and BSRM Group have been continuing their dominance in steel market

Iron Scrap is a major raw material for steel units based in Bangladesh. Only a small amount of required small materials are available from local source and the country needs to import significant volume of iron scrap materials from abroad.

To cater to the growing demand in coming days, other major industry players like KSRM and GPH Ispat are also increasing their production capacity significantly. KSRM is undergoing an expansion plan to expand its capacity by 45% in addition to its existing 0.4 million MT annually. GPH Ispat also announced for a massive expansion of its re-rolling mill capacity from 0.12 million MT to 0.76 million MT per year and billet making capacity from existing 0.17 million MT capacity to 1.0 million MT.

Availability of raw materials, transportation, port facilities & tariff rationalization are the key challenges for the development of steel industry. Steel demand is derived from other sectors like construction building, roads, consumer durables and infrastructure, it’s fortune is dependent on the growth of these user industries. However, initiation of Padma Bridge construction, acceleration of government’s big infrastructure projects under Annual Development Program (ADP) and revival of the local real estate industry will undoubtedly boost-up the steel consumption locally.

However, uneven completion from big players, price fall in international steel market, dependency on imported raw materials & decline in domestic demand for construction materials due to bearish vibe in the real estate sector are forcing the small mills owners out of the market.

All data and information contained herein are collected from Annual Reports of the listed Steel companies, World Steel Association, The Daily Star, The Financial Express, the daily Prothom Alo, Phone Interview with company personnel, You Tube video documentary by the industry players & RIL’s own storage & resources. RIL cannot ensure the accuracy of the data and information except for its own resources. Moreover, this publication is produced by Research and Innovation Lab at Royal Capital Limited(RCL) solely for the clients of RCL Clients are expected to make their own investment decisions using any information contained herein. The contained info on the report don not be interpreted as an offer to sell or a solicitation of any offer to buy any investment. Projections of potential risk is based published information but does not guarantee of any actual risk or return to be materialized.